The sound of thunder converging upon 14 Wing Greenwood September 10 wasn’t the approach of a late summer storm. In fact, the steady stream of old school incandescent headlights scattered through the morning fog was the ﬁrst indication something else was going on. Something big. The arrival of over 200 vintage cars announced the opening of Wings & Wheels 2016, now the biggest single day event at the Greenwood Military Aviation Museum.

Attractions included seven aircraft open for public tours, as well as four others on static display and two under construction; guided tours of the museum and restoration workshops, live music from the 14 Wing Band Jazz Combo, and war-era Jeep rides. Three surviving Second World War Lancaster crew members were also honoured during a short ceremony hosted by Wing Commander Colonel Pat Thauberger. The CANEX and Flight Line Café hosted a BBQ lunch in exchange for a freewill offering, and many took advantage of the air conditioned mall to get a break from the heat. Wings, wheels showcase a classic collection Over $1,000 in glass etched trophies were handed out to car show participants, as well as $2,000 in prizes. The trophies were creatively named after each of the many aircraft that were once, or are currently, stationed at Greenwood. The winners all had cars that had some unique aspect in common with the aircraft named on the trophy, so everyone was kept on their toes until the end. The organizers would like to thank the 42 local businesses and village sponsors that helped keep the event free for participants and spectators, making Wings & Wheels 2016 possible. Thanks also go to the 50 museum volunteers who ran the show like clockwork. Last but not least, appreciation is extended to the car owners and the general public for having kept the museum aircraft and grounds pristine. 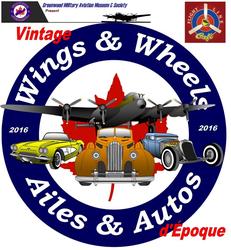