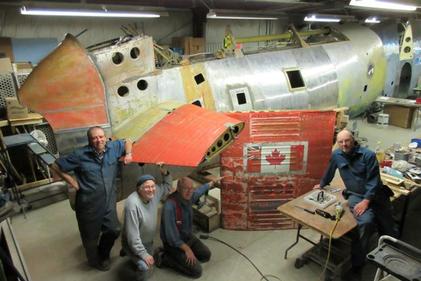 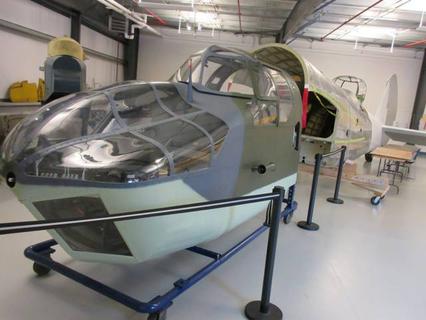 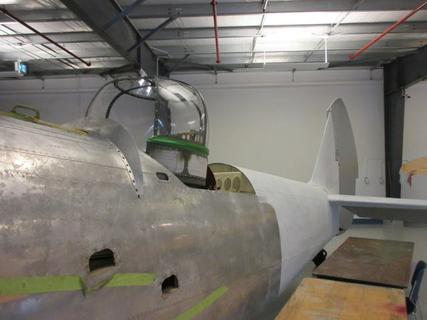 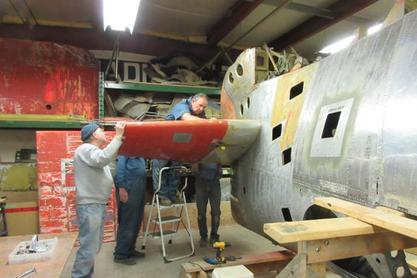 Yet another banner year was realized by the dedicated volunteers at the Greenwood Military Aviation Museum! And with so much more coming down the pipeline that the enthusiasm displayed by its volunteers is not surprising – for they are the backbone of this institution.

2015 marked the 12th year for the Flight Education Team, tutoring local grade 6 science students from participating schools. Our veteran and civilian history and aviation volunteers provide hands-on knowledge on the theory of flight and the history of the RAF/RCAF/ and CF at Greenwood. To date, over 6500 students and staff have experienced the program.

The Lancaster reconfiguration was the major focus in the Air Park this summer. Since the elongated nose was removed, many hours were spent by the volunteer team shortening the nose by 31"(to make it authentic as a bomber), refurbishing and painting it; this summer another volunteer team re-attached it to the fuselage. The daunting task of preparing and re-painting the entire aircraft was carried out, while a new, replica Fraser Nash forward gun turret (produced by the volunteers) was installed. Due to severe crazing, the lower bomb-aimer’s bubble also had to be replaced, with a volunteer re-built replica. Decals and aircraft designation numbers will be added this Spring, completing the magnificent reconfiguration.

The Bolingbroke restoration project saw more exciting progress with completion of the wing box inner flaps, while a set of wheels was obtained from Alberta. Soon, the complete wing box will be attached to the assembled gear legs and wheels so that engine and cowling work can commence on the upper structure. The Boly cockpit was completed and moved from the workshop into the Museum extension for viewing with the completed fuselage, which is now being sanded/buffed, hole filled and primed, prior to camouflage painting. After extensive re-glazing, the dorsal turret was assembled and mounted to the upper rear fuselage, completing the major work on the entire cockpit and fuselage structures. While some volunteers continue with the wing box, others will restore the two wings - the port wing having already received some new panels and a complete tip with new position light and glass lens.

Another new task saw the beginning restoration of a Lancaster-era aircraft tug or "mule". As a contribution to the Second World War effort, the Mercury Truck and Tractor Company retooled their tractor and truck chassis to produce tugs. This particular example was produced later by the Pettibone Mercury Tow Tractor Company of Galion, Ohio in 1964/65 and sold as a Mercury Super Huskie.

The H-44 "Flying Banana" helicopter restoration team successfully replaced five large, corroded panels on the rear fuselage of RCAF 592 and now are refurbishing the large tail fairing. Three of the four top transmission tunnel covers were repaired, replacing the light fibreglass construction with durable aluminum. Re-installing the upper transmission case will see the first placement of the major mechanical parts. A nose section, purchased from a company in North Carolina, contributed pilots seats, a hoist and many needed pieces. All needed parts from the secondary (donor) rear fuselage were removed, and the hull of the rear fuselage is being populated with these parts and pieces, including electrical panels, oil cooler and lines, and hydraulic lines. Only the final rear and forward fuselages remain in the workshop, showing the excellent restoration progress.

In the final stages of completion of the Dakota aircraft, the cargo area walls are being completed and necessary items installed. Some paint delamination will be repaired in the Spring.

A major upgrade to the Air Park was the installation of underground electrical wiring to all the aircraft, enabling the placement of air exchangers and dehumidifiers in each aircraft to prevent/reduce corrosion and mildew to sensitive interiors and equipment.

Inside the Museum, many small changes and additions added to the interesting displays. Two War-time dioramas were completed, helping visitors understand the realities of war: a 404 Norwegian fiord attack, depicting "Black Friday" 9 February 1945, when the Squadron lost six Beaufighter aircraft and eleven airmen - the Squadron's largest single-day loss, at which ex-CO, Lieutenant-Colonel David Proteau, attended and spoke of the historic event; and a 405 night bombing run, depicting a 405 Pathfinder formation, stacked at various altitudes, with the visitor looking through a bomb aimer’s window as if seated in the nose of a Lancaster. Sound and light simulates the feeling of being “there”. Misty clouds obscure part of the target, and lights simulate target markers dropped by the aircraft, explosions of bombs and enemy flak.

Members of the Bridgewater Legion Branch No. 24 donated an exhibit of Canada's brave men and woman who lost their lives serving in the war-torn country of Afghanistan. View this sobering exhibit in the Sperwer UAV area of the Museum. All were saddened also with the passing of two major figures involved in Museum activities over the years: Ron Hill and Frank Honey. May they rest in peace; LEST WE FORGET.

The Greenwood Band and Pipes and Drums held a Battle of Britain Commemorative concert in September, with well-attended success and proceeds donated to the Museum's aircraft restoration fund. Such support is so very much appreciated, thanks and kudos to all.

The inaugural Wings and Wheels 2015 vintage aircraft and car show held at the Aviation Museum in September was a resounding success!  Seventy-two classic, antique, and special-interest vehicles travelled from as far away as Yarmouth, Dartmouth, and Bridgewater. These beautifully-restored cars were parked under Museum aircraft, drawing hundreds of spectators.

Visitors enjoyed guided tours of the Museum and were allowed inside three of the restored aircraft.  They also got a first-hand look at the on-going restorations by Museum volunteers.  The Flight Line Café served up a BBQ lunch, in addition to its usual soups and sandwiches; even popcorn and cotton candy were available for the young and the young at heart.

Other major Museum restoration projects for the future are a Link Trainer - the original WW II flight simulator - and a C-45 Expeditor aircraft, parts of both received this summer from the Reynolds Heritage Foundation in Wetaskiwin, AB. Appropriate time and space will dictate the start of these projects.

Another dimension to GMAM is the introduction of a public access library and resource center with hundreds of books and periodicals on history and aircraft-related topics. Visitors also can admire the beautiful pictures, paintings and many fantastic aircraft models from the Museum's collection displayed around the room. This resource center is conveniently located just across the hall from the Flight Line Café.