You, probably, have heard the statement “people come in all shapes and sizes”; at the Greenwood Military Aviation Museum “our volunteers come from different backgrounds”. One of the hardest working and most inspiring is Malcolm Uhlman, who doesn’t come from a military background at all, but was a community pharmacist for 37 years before retiring. After he retired, Malcolm decided to step out of his comfort zone and strive to learn something new, which brought him to work and volunteer with the Museum and its Society.

Malcolm has the right attitude and has become an integral part of the Museum’s aircraft restoration team, learning metal and wood work, electrical wiring, painting, and all aspects of aircraft construction, often designing and creating missing parts or finding ingenious ways to improve efficiency. One of his first restoration projects was the H-44 Piasecki helicopter, an aircraft with which he has a personal connection. Malcolm explained that as a child living near the Greenwood military base, he was playing pond hockey with his brother and friends, working hard to clear snow from the ice. A pilot in a blue and red H-44 arrived overhead, hovering the aircraft close to the ice, blowing the snow and clearing the ice for the boys. Malcolm remembered this experience and described it as one of the primary reasons for his interest in joining the H-44 restoration team. Since joining the Museum, he has played important roles in preserving Greenwood’s history with the restoration of Bolingbroke 9997 and the H-44 helicopter, and, currently, on the Beechcraft twin-engine C-45 Expeditor. 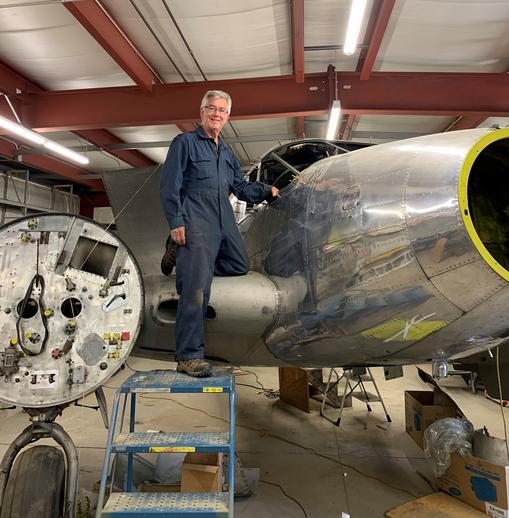 Malcolm enjoys the amazing people he works with, learning from others and having new experiences every day. Besides the restoration work, he has contributed photography of projects and events, Museum articles for the website, newspapers, and Canadian and international aviation magazines, and he was on the Society Board of Directors and served as Director of Public Affairs, responsible for press releases and administration of the Museum social media, such as Facebook.

When asked about the recent work on the Expeditor project, he has described the aircraft as coming to the Museum in very good shape, with full wiring and most, if not all, of its parts. The unprecedented excellent condition of the aircraft when it arrived, coupled with replacement and restoration of many parts, new paint and interior, will allow the aircraft to withstand Nova Scotia weather outside. So far, the Expeditor’s exterior has been polished, the tail and wings removed and are under restoration, the floor and interior have been renewed, the cockpit stripped and ready for a new instrument panel, seats and other accoutrements. Malcolm did most of the window repairs, and new ‘glass’ will replace the crazed and cracked old ones. The engines are to be overhauled to a limited degree and, on completion of the total aircraft re-assembly; a beautiful paint job will be applied to represent the aircraft flown from RCAF Station Greenwood in the 1950s.

Malcolm plans to continue with the ongoing maintenance and preservation of all Museum aircraft, a necessity when aircraft are parked outdoors, to allow future visitors a walk back in time of the history of Greenwood’s units from 1941 to the present day. Over the 12 years he has volunteered, Malcolm has created a lasting impression and, like all volunteers, deserves immense gratitude for his incredible work and inspiring determination.