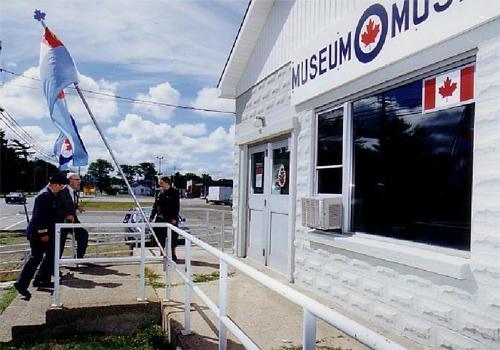 The Greenwood Military Aviation Museum was officially opened on the 27th of May, 1995 to preserve the story of Greenwood as a tribute to those men and women who served there. Located in the former Base Library, the 1900 square feet of display space was divided into two halves, one of which traced the development of Greenwood from 1942 to the present while the other half depicted the Base squadrons and units unique histories. It was not long before the display space was filled to capacity. During first year of operations the Museum had 587 visitors. In 1997 they had over 2,000 visitors and in 2014 there were over 23,000 visitors.

On 2 Oct 98, while returning from a search and rescue (SAR) operation, Labrador helicopter 305 exploded in mid-air in the vicinity of Marsui, PQ. In the aftermath of this tragic accident, that claimed the lives of the six aircrew, the outpouring of support throughout the Annapolis Valley was truly heartwarming.  It manifested itself in many ways, including an offer from the Chamber of Commerce to construct a Memorial Garden as a living tribute to the sacrifice of these airmen.  The garden was officially dedicated by His Excellency, the Governor General of Canada, Romeo LeBlanc on June 4th, 1999. The Gardens were constructed as a dedication to the 6 crewmen of Labrador helicopter 305 that crashed near Marsui, Quebec. Most of the material and labour was donated by local businesses, organizations and individuals as a tribute to the crew of Labrador 305.

In 1999, 11,000 square feet of the Canex building was vacated due to downsizing and was made available for new Museum spaces. After months of renovations the new Museum facility was officially opened by Colonel Brian Handley, the then Wing Commander.

Since then the Museum has grown into a world class facility. Here are some of the highlights over the years: