Closer to home, the family of a local Nova Scotian, Christopher Hubley; has just donated an extensive collection of intricate balsa and paper-covered model aircraft. These delicate and impeccably painted models are the work of a patient and artistic artisan with a deep love of aircraft. The museum is proud to display these works of art. Hubley had a short career in the air force but, sadly, succumbed after a life afﬂicted with diabetes. The museum extends appreciation to Chris for his life’s work, and thanks to his family for sharing these as a donation. See them on display at the museum.

A 1940s-era, hand-drawn note made by British airman Hughbert King, who served at RCAF Station Greenwood.

The Greenwood Military Aviation Museum casts its eye far and wide to build an extensive collection of aviation memorabilia, particularly tied to the heritage of the former RCAF Station Greenwood, now 14 Wing Greenwood. Two recent presentations highlight just some of the special history many of the museum’s artefacts bring with them. Hughbert King, an airman from near London, England, served here at RCAF Station Greenwood in 1943 as a training instructor. His nephew, Hugh King Jr., recently donated a handwritten notebook containing an eclectic collection of aircraft facts, with pages and pages of plane maintenance checklists – from Bristol Blenheim hydraulic systems to marshalling at night and ﬁre ﬁghting. Included are many exquisite, hand-drawn schematics, colour-coded and intricately labelled: works of art in their own right. “I recall as a lad him mentioning he travelled there in style on the RMS Queen Mary and came back in a tub of a boat!” says King Jr. This link to the past is now on display at the museum in the extension, which contains many Second World War-era exhibits, including a restored Anson II aircraft. 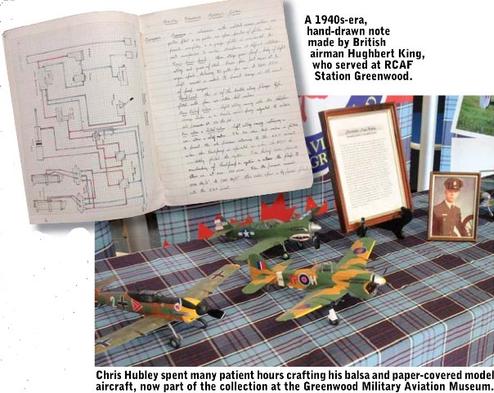