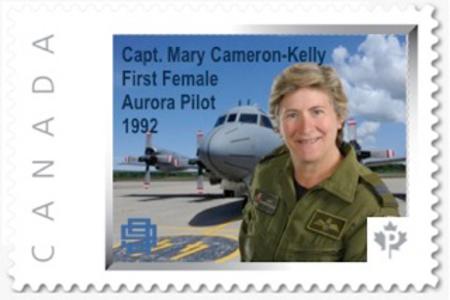 Cameron-Kelly will celebrate her 37th anniversary in the military July 15. Throughout her career, she quietly persisted and worked to overcome any perceived knowledge or experience gaps. In becoming a recognized and well-respected colleague, she made it impossible for decision-makers to overlook her abilities. 14 Wing Greenwood Deputy Wing Commander Lieutenant-Colonel Bruno Baker attributes Cameron-Kelly’s success to her “being a tremendous team player, in addition to being a highly skilled pilot, a person who knows when the gain is not worth the fight, someone who knows which rules not to challenge and which ones should be challenged.”

Cameron-Kelly’s colleague, Master Corporal Peter Redden worked with her to get just the right photograph for Suzanne Wiltshire to use in designing the Captain Mary Cameron-Kelly stamp and commemorative envelopes (first day covers). The stamp will be launched at 1:30 p.m. July 15 at the Greenwood Military Aviation Museum. The public is welcome to attend. Included with stamps is a brief bio of Cameron-Kelly, as the Ninety-Nines would like more people to know about this remarkable woman. Stamps are available in four formats: sheet of 50, booklets of 12, a keepsake sheet (one large stamp image plus 26 regular sized stamps, suitable for framing), and commemorative envelopes (first day covers). Profits from stamp sales honour other people and groups’ contributions to aviation, support flying events and preserve historical materials. These stamps are not available from Canada Post outlets, and may also be purchased at http://canadian99s.com/stamps.

In 2008, the East Canada Section of the Ninety-Nines, an international organization of women pilots, launched a plan to honour noteworthy Canadian women pilots. Through Canada Post’s Picture Postage program, the Ninety-Nines’ stamps may be used as regular letter postage within Canada.

Cameron-Kelly, currently serving at 14 Wing Greenwood, was born and grew up in North Sydney with her parents, Regis and Thomas Cameron, and brothers Tommy and David. As a child, when she wanted to play hockey with a team which didn’t allow girls, she and a friend played baseball on a previously all-male team. She became interested in aviation at a young age: when she was four, her parents bought her a pilot’s helmet, which she wore while watching television. During high school, Cameron-Kelly took several science courses, aiming to become an astronaut. She joined the Air Cadets, hoping to be chosen for the summer flight program, but, when she finished ground school, she was too old for the training program.

Cameron-Kelly’s father had served with the Canadian Army Corps during the Korean War, so she was attracted to the military. Following high school, she joined the Canadian Air Force in 1981. Few women were seriously considered for pilot training, and there were few role models for Cameron-Kelly. When she initially applied for pilot training, she wasn’t accepted and had to wait two years before she could apply again. She worked as an airframe technician, but she knew she really wanted to fly. She applied again - and wasn’t accepted. Continuing in her spare time, she earned a civilian private pilot license and participated in the Webster Competition, placing second for Best Amateur Pilot in Canada. Because she had taken science rather than mathematics courses in high school, and believing she had a math deficit, Cameron-Kelly took more mathematics courses as an adult. Recognized for her knowledge on airframes, Cameron-Kelly was offered an instructor position.

After teaching the airframe course for two-and-a-half years, she finally remustered for pilot training in 1986. But, moving from the ranks of a non-commissioned member, she was required to attend boot camp, with the leadership focus required for officers. Though her civilian flying had given her a good foundation, she had another four months of aviation training: ground school, plus flying the Muskateer and Tutor - basic training aircraft. After Wings graduation in 1991, when given a choice of plane to fly, Cameron-Kelly became the first female in the Canadian Forces to fly the Aurora, the main plane she had worked on as an airframe technician. There’s nothing like really understanding the mechanics of the plane one flies to give a person confidence!

Three years later, Cameron-Kelly qualified as an aircraft commander on the Aurora and, in 1995, was appointed the first female maritime patrol crew commander. In this role, she commanded a team including six women, which helped rescue nine fishermen as their boat was sinking in Canada’s North; and flew to the Arabian Gulf, where she participated in Operation Apollo in the fight against terrorism. Her crew flew the last Aurora home. She has since logged over 7,000 hours on the Aurora, patrolling Canada’s East and Northern coasts and flying several types of missions.

Cameron-Kelly is married to Jim Kelly, who also serves in the Canadian Armed Forces Reserves at Greenwood, and they have two young adult children, Cameron and Amanda.