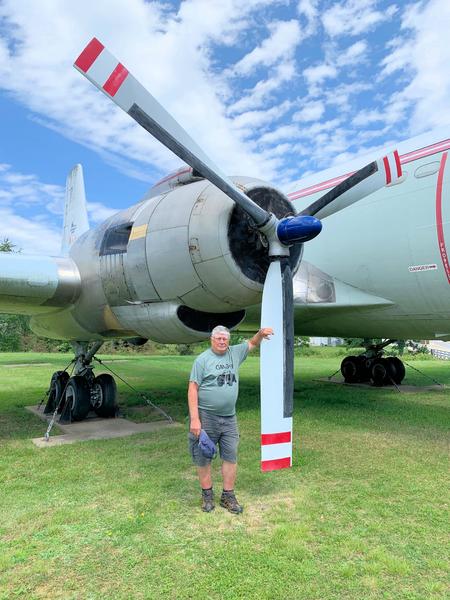 The motto of dedicated greenwood Military Aviation Museum (GMAM) volunteer Bob Lorencz, even after retirement, continues to be "Choose a job you love and you will never work a day in your life." Bringing an interesting prespective to the museum after his 31 years of service, Bob worked with the royal Canadian Air Force (RCAF) as an aircraft technician, including having civilian aircraft experience. He provides the Museum with not only valuable knowledge but he also positively impacts the lives of those around him.

When speaking to Bob, one is immediately impressed with his memory and the vast experiences and stories he describes, with a humor that brings a smile to your face. He enlisted in the RCAF 22 November 1963, completing training in St. Jean, Quebec in aircraft electronics and being posted a year later to Moose Jaw, Saskatchewan. It was here that Bob had the privilege of being on one of the first crews to work on the new CT-114 Tutor (the Snow Birds aircraft), learning about the amazing aircraft and from knowledgeable WWII and Korean War veterans. After 8 years working on the Tutors, he moved to Greenwood on the Argus for 9 years, during the Cold War. As he moved up the ranks and became a Master Warrant Officer and, eventually, Captain, Bob continued to work on many different aircraft in Cold Lake, Alberta and Ottawa, and Kingston, Ontario, always enjoying hands-on work. After 31 years in the RCAF, he decided to move to the civilian aircraft sector, first working for Bombardier and then working in California for a short time. Bob describes one of the most interesting experiences of his career as being the year he spent working with Bristol Air Space in Africa. Within the 6 years post-military he spent working on civilian aircraft, he worked everywhere from Wichita, Kansas to Toronto, Ontario, eventually ending his career, full circle, working on the CT-114 Tutors in Ottawa, Ontario.

In 2012, after being retired for a few years, Bob moved to Greenwood and visited the Greenwood military aviation Museum, interested in the Argus aircraft on display. Initially attending a volunteer Museum Society information night, he became interested in the ongoing Museum project, Lancaster Living Legends, finding and collaborating with Living Legend Viola 'Lola' Videto with the project and, later, collaborating on a novel with her. While working with this project, he decided to become a volunteer with the Museum's society, initially with the Flight Education program. After 4 years, Bob still works on Museum display lighting and various electronics projects, and gives tours to visitors, he re-wired the Piasecki H-44 helicopter restoration, assisted with repairs to the Museum's Air Park aircraft and, currently, he also has a crucial role providing leadership of the C-45 Beechcraft Expeditor restoration, incorporating friendly teamwork and cooperation in the decision-making processes. With a warm smile and a willingness to assist with any request, Bob brightens the day of everyone working and volunteering at the Greenwood Military Aviation Museum.

Describing his time at the Museum as a wonderful and enjoyable experience, being surrounded by kind and intelligent individuals, Bob loves what he does and plans to continue working at the Museum well into the future, fostering curiosity in young minds, inspiring the next generation and keeping the history of the RCAF and 14 Wing Greenwood alive.