We welcomed two new workers to the Lancaster team and they're already making a big splash. Over the course of two days Gary and Chris figured out how the tail turret was held in place, removed it, and started working on it in the workshop.

Ian Hinks, from England, is touring Canada to see all the Lancasters that are here. He spent three years with the Battle of Britain Memorial Flight when he was in the RAF and flew in its Lancaster, hence his love for the aircraft. After visiting the Bomber Command Museum in Nanton, AB, the Canadian Warplane Heritage Museum in Hamilton, Ont. and the Greenwood Military Aviation Museum here in Greenwood, Ian is off the see KB882 in Edmunston, N.B. In this image Dave and Brian are explaining the Museum's major Lancaster reconfiguration project. 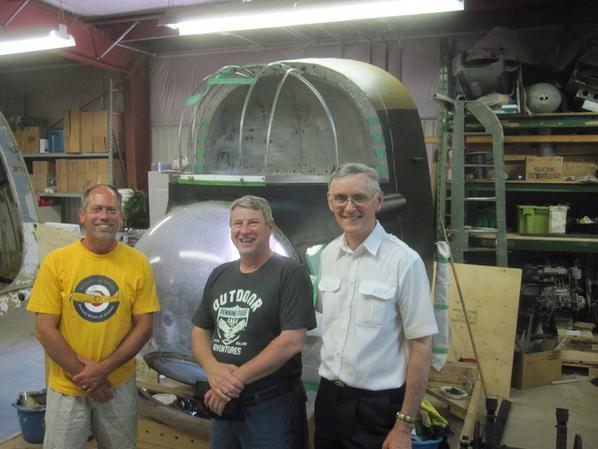 This project will re-configure the Museum’s Lancaster to a Mk 3 WWII version. The 40” plug in the nose has been removed and the front turret will be exchanged for a WWII variant.  A mid-upper turret will be added.  The rear turret will be altered to ensure the guns cannot be removed by vandals.  Minor alterations will be made to convert the aircraft to a WWII Mk 3 version.  The aircraft will be painted in a 405 Pathfinder Sqn camouflage pattern.