Legacy Of Lancaster Legends Lives On 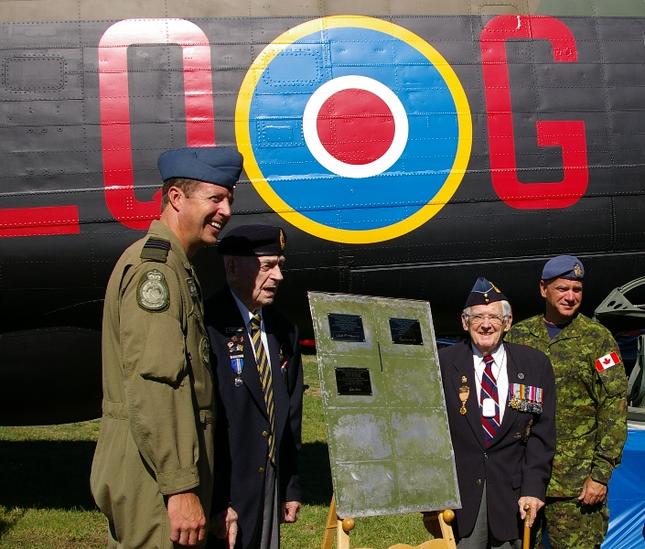 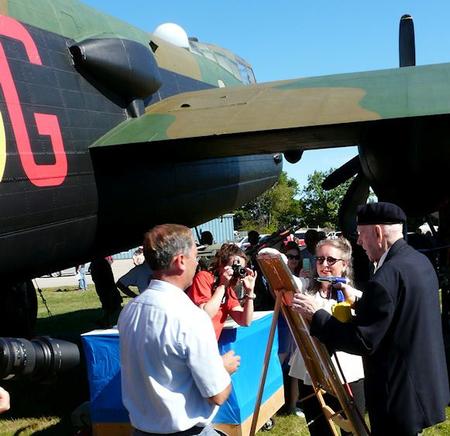 ​Museum volunteer David Saulnier leads the Lancaster restoration, a slow-and-steady project already three-and-a-half years along, with hundreds of hours put in by the team – and hundreds more to come. Along the way, he thought of the “Lancaster Living Legends” initiative, which would place a plaque for every Lancaster survivor the team can ﬁnd inside the aircraft. This initial ceremony was held as part of the museum’s second annual Wings and Wheels vintage car show, with visiting classic cars arrayed under the wings of the various display aircraft. Attending in person from Nova Scotia were Flight Sergeant (retired) Clark Montgomery, 94, who served from July 1941 to December 1945 with 428 “Ghost” Squadron. He ﬂew 14 operational missions in Lancasters, primarily as a Lancaster mid-upper gunner. Flight Lieutenant Roy Loomer, 93, served from May 1942 to May 1957, including three operational missions as a tail gunner with 408 “Goose” Squadron before being shot down in February 1944 and held as a prisoner of war until May 1945. Flight Sergeant Peter Bone, 95, could not attend (he lives in British Columbia). He served from September 1944 to June 1945 with 626 Squadron, putting in 25 operational missions as a mid-upper gunner. “I’ve been serving for 34 years, and I have stories – but none like yours!” said Wing Chief Warrant Officer Luc Emond, as he was introduced to Montgomery and Loomer. It’s true: Loomer describes having to bail out of his Lancaster, falling “like a bat out of hell” as he struggled to ﬁnd his parachute’s ripcord on the right side (it wasn’t there – it was on his left side: he’d pulled his chute on backwards). Montgomery’s crew won a contest one mission, returning to their English airfield with hundreds of bullet holes in their aircraft: more than any other plane that night. 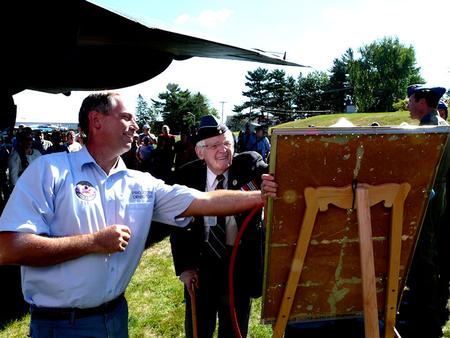 Three men were honoured September 10 for the role they played decades ago, charting the path for today’s Canadian Armed Forces’ ﬂying crews. The on-going Greenwood Military Aviation Museum’s Lancaster restoration project will include something special in recognition of what museum volunteers call “Living Legends.” Plaques for the three initial veterans – Clark Montgomery, Roy Loomer and Peter Bone – were signed, unveiled and will be riveted inside the aircraft, near where the men worked during their wartime service. “Right now, we have some of the men and women from 14 Wing and the Royal Canadian Air Force overseas, working against Daesh in Iraq,” said 14 Wing Greenwood Commander Colonel Pat Thauberger. “They are ﬂying the CP140 Aurora – a modernized, state-of-the-art, world-leading aircraft. Their squadrons formed in the crucible of the Second World War and, when we look back from where we’ve come – the precise navigation and targeting nowadays, with lasers and radar – and think about the Second World War, when the ﬁrst indication ﬂying crews had they were close to a target was being shot at themselves; we’ve come a long way. “It is a true honour to be here, recognizing your heroism. You literally put your lives on the line with every mission, and that is a proud legacy we carry forward.”