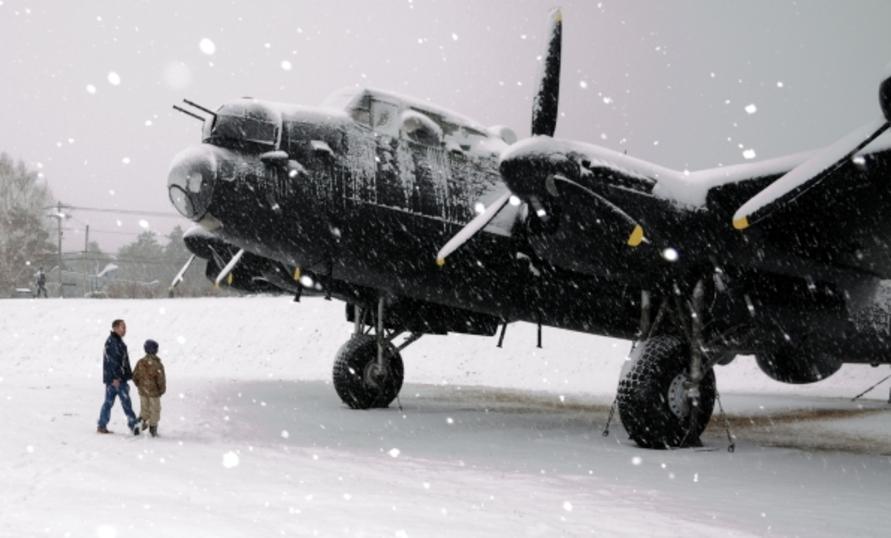 Lancaster restoration team lead Dave Saulnier grills aviation buff Euan MacDonald as they head out to the Greenwood Military Aviation Museum’s Air Park: what kind of engine? How many cylinders? How much horsepower?

of a modern Canadian Air Force base, and who

wouldn’t be over the moon? Big smiles and hugs for all

were distributed by 11-year old Euan MacDonald of Dartmouth, as he and his family visited 14 Wing Greenwood March 11. The day was carefully arranged to meet - and exceed – many of MacDonald’s dreams of military aviation history, particularly that of the Lancaster aircraft. When 14 Wing ofﬁ cials heard of his determination to ﬂ y – at $3,500 per hour – on one of just two airworthy Lancasters left in the world, they stepped in to get him a littler closer. MacDonald started a threeyear fundraising project this winter, with a planned set of bicycle washes, bake sales and errands for neighbours; to earn enough for a ﬂ ight on the Hamilton, Ontario-based Lancaster.

“His grandfather and his dad were always into military history, and that seems to have rubbed off on Euan,” said his mother, Anne-Marie McElrone. MacDonald’s grandparents met in the Air Force: one was a military ﬁ reﬁ ghter once stationed in the Yukon, and the other was a pararescue nurse.

“He’s been collecting books and been interested in planes – then he discovered you could ﬂ y in the Lancaster. I accidently said ‘No’ at ﬁ rst, then I thought I was sending a really bad message as a parent. We said, ’All right,’ and his ﬁ rst bottle drive raised $80. We walked all day, and he enjoyed it – but he realized what $3,500 meant, and that he was up for it.”

The family was prepared for a “long, slow path” to seeing MacDonald’s dream becoming reality, but a groundswell of interest quickly changed things. After just a few months, including some of his planned fundraisers, MacDonald has collected donations and earned enough to pay for his Lancaster ﬂ ight. In the meantime, the 14 Wing visit was taking shape: Wing Commander Colonel Pat Thauberger mailed MacDonald a family invitation to come visit. Lieutenant-Colonel Simon Poudrier welcomed the family as they arrived at the Greenwood Military Aviation Museum for the big day.

“For us, it’s heart warming to see that much enthusiasm for aviation and history,” Poudrier said. “You’ve got quite the day ahead – some stuff many people on the base have never done!” MacDonald grabbed Poudrier for a hug and a picture, signed the museum guest book, and museum staff and volunteers took over to lead a jam-packed morning.

“The Lancaster has always been my favourite plane – it does so many fantastic things: bouncing bombs, it had so many sorties…,” MacDonald said. “I’m really looking forward to ﬂying in it, but just being able to touch it today is good enough for me!”

McElrone followed her son around the 14 Wing tour, busy taking photos for MacDonald’s Lancaster website and Tweeting the highlights. “His friends at school think he’s pretty weird, so to have his personal interest recognized and supported by so many people – and strangers – is cool. People want to see what happens when you dream big,” she said. 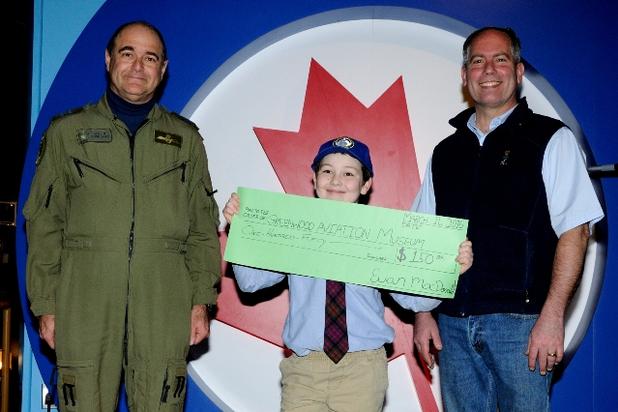 Euan MacDonald left some of the funds from his own Lancaster dream with the Greenwood Military Aviation Museum March 11, following a specially-arranged tour of the museum and 14 Wing Greenwood. He wanted to support restoration work on the museum’s Lancaster project. He’s pledged another $500, so the dream grows bigger!