Johnson has an idea Dodge’s artefact may have

once been on the side of an old Fokker aircraft 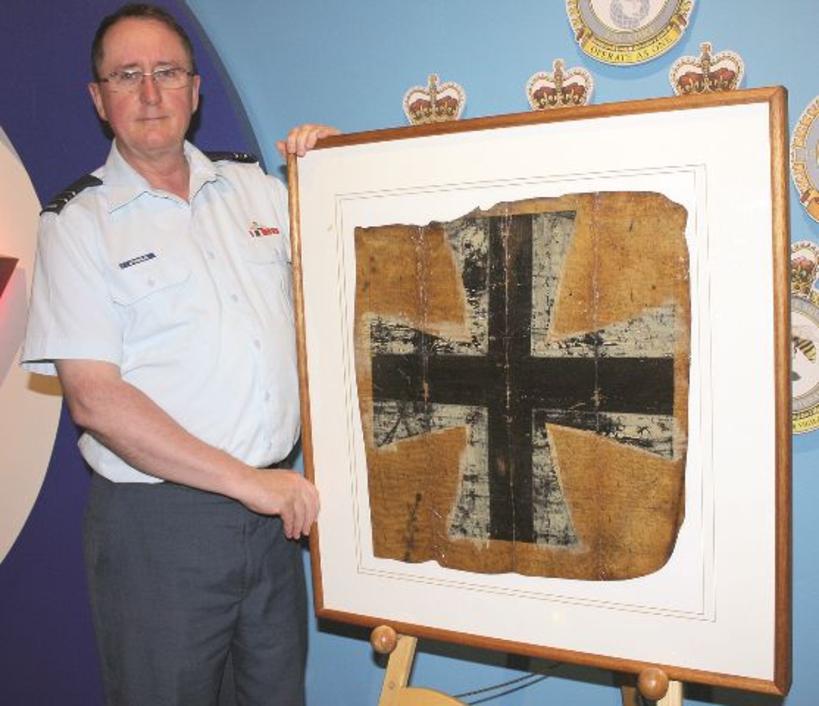 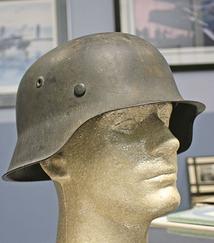 June 13 is “by far” the most exciting day Captain Robert Johnson has experienced working at the Greenwood Military Aviation Museum. “Two ladies walked into the museum,” he says, describing how Mary Dodge of Middleton carried in a Second World War M42 Luftwaffe helmet, complete with the name of the physician who wore it etched inside: “Dr. Schultze.” Dodge’s husband, Courtney Dodge, brought the helmet home after his own service years with the Canadian Army’s show band, and Johnson is working on tracking the German ofﬁcer down to add historic detail to the ﬁnd – “but that is not the story,” Johnson continues. “They brought in another artefact that makes this look like nothing – it’s a war prize.” Courtney Dodge had told family he brought home, in 1945, a piece of painted airplane fabric he’d cut off the side of a German air force plane in Hamburg. “You’re looking at a 1918 balkenkruez – a Greek cross – painted over top of a 1916 or 1917 iron cross: two versions on one piece of fabric – that’s a rarity.” The 1916 symbol was used for just two years on German aircraft, replacing an earlier, ﬂared end cross for just two years, before it, too, was replaced by the iron cross – a simple crossed set of block lines. “You can see the pencil marks on the edges, where someone lined it all up to paint out the earlier cross.

door:” what appears to be a Balkenkreuz (Greek Cross) fashioned over an Eiserneskreuz (Iron Cross), painted on

aircraft fabric that could date to 1916. Mary Dodge of Middleton brought the artefact in, describing how her husband,

Courtney, a Canadian Army show band member during the Second World War, brought it home in 1945.

The fabric is now terribly yellowed, and the original white paint is flaked away, so you can see both. I’ve never seen this before – this is a 100-year-old artefact, just walking in our door.” Johnson found an online listing of a similar piece of aircraft fabric with the Greek cross on it, with an appraised value of over $60,000. “You can’t put a value on this – it’s invaluable just for the story it tells if you know what it is. It’s absolutely incredible.” Johnson was up all night doing his early research and has a more likely idea of the piece’s provenance. “It was customary in those days to cut out the aircraft markings after you’d shot it down and put it in your Mess.” Johnson expects this artefact was hanging in a British or even a German Mess at one point, before ﬁnding its way overseas. “We go with the story Courtney Dodge gave, but it doesn’t quite add up.” He opened the framing to check for any handwriting that might indicate a date of capture, but couldn’t ﬁnd anything through the backing. Further investigation may involve ultrasound or X-ray tests. “Crazy, isn’t it? This is, by far, the neatest story ever to come in – too cool. And we’re going to see more of this as people clear their homes. Seeing this, I would hope more people would say, ‘I have something like that,’ and items would come to the museum rather than a dumpster or yard sale. “This is definitely a centenary artefact that needs to be preserved, and Mrs. Dodge had no idea what she had. She’s delighted, and she knows we’ll treat it well.” Johnson has alerted both the Canadian War Museum and the Canadian Air and Space Museum of the arrival of the artefact, and has requested research support in its appraisal.