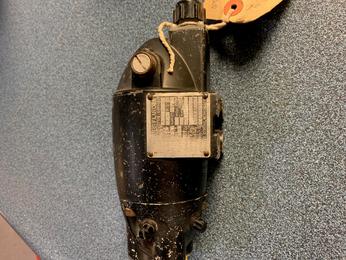 This object is an electric motor driven fluid pump. The item would have been used on aircraft in the 1950s, with this device being made  in November 1958 in Montreal by Aviation Electric Limited.  To prevent the build up of ice on cockpit windshields, the pump sprayed alcohol over the exterior glass. Anti-icing devices and fluid are also used on propellers, running down the leading edges of the propellers to prevent/clear the ice and avoid the ice disrupting the flow of air over the blades, making for rough running, vibration and possible failure. If the ice is not melted, the propeller throws chunks of ice, causing damage to the air frame. Some other consequences of ice on the exterior of the aircraft include a loss of lift, reduced performance, weight gain and an altered balance of aerodynamics. With the creation of de-icing and anti-icing technology, pilots and aircraft crew are able to eliminate the extreme hazards that come with ice build up and have a much safer flight in cold and harsh weather.