Stan was a great supporter of this Museum and never missed
an opportunity to wear his uniform. On many occasions, he was
with his long time friend Frank Honey, seen here to the left of Stan.. 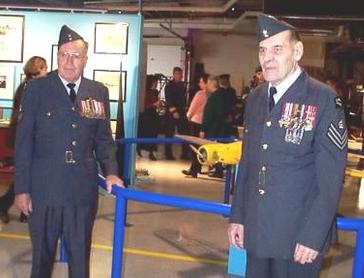 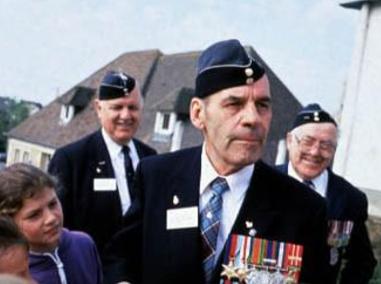 October 22, 2004 Flight Sergeant Stanley R. Steppings, CD, RCAF, Retired passed away. Stan was a veteran of World War ll and a long time supporter of the Greenwood Military Aviation Museum. This display is dedicated to his memory.

Stan was born in Montreal, Quebec on October 18, 1922 and joined the RCAF in 1941. He was trained as a fire fighter and his first tour of duty was with Bomber Command in England in 1942.

When the 2nd Tactical Air Force was formed in 1943 he was posted to 129 Wing (RCAF) of  his formation,  and remained with it until it was disbanded in July 1944.  This Winwas one of the units to land in Normandy, France soon after the invasion on 6 June 1944. They were getting ready to go to Carpiquet Airport but it was still held by the Germans. They landed in Normandy on 13 June at an emergency airstrip near a village named Plumeto B10. That is where they were stuck until they took Caen at the end of August. They were only five miles from Caen, and the Germans knew we there, so you can imagine what they went through.

Stan’s next posting was to 126 Wing (RCAF) that consisted of 401, 411 and 412 Squadrons all flying the Spitfire IX. Stan was with the Wing when on May 5, 1945, four Canadian Spitfires flew what was almost certainly the last sortie of World War II.

Stan was repatriated to Canada at the end of the war but remained in the service until 1963 when he retired from CFB Cornwallis as the Chief Fire Inspector.

In 1989, Stan returned to France to visit the places

he had been and to play tribute to those who did

not make it back home.