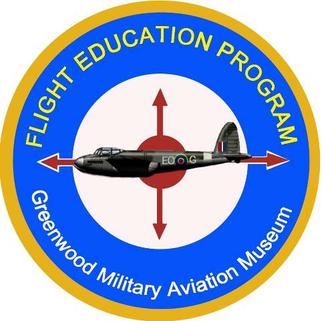 To identify the instructors that represent the Flight Education Program, Sophie Saulnier team member, created a crest made out of three main elements. First, to represent history, the background is a series of concentric circles (red-white-blue-yellow) called a roundel. The roundel we chose was painted on all the aircraft fighting for the British Common-wealth. The second element is the four red arrows which identify the four forces of flight that affect all aircraft. Students learn in school about the four forces of flight: Lift-Weight-Drag-Thrust. These forces are explained by our instructors throughout the tour using several of our displays. Finally, the aircraft on the crest is a WWII Mosquito bearing 404 Squadron markings.

Over the past number of years the Greenwood Military Aviation Museum (GMAM) has been coordinating a highly successful Flight Education (Flt Ed) Program, specifically for Grade 6 students, in cooperation with the classroom teachers and escorts from some 14 Annapolis Valley and other schools.

Planning for this program started in 2002 and evolved out of the interest and initiative of a few teachers at the Pine Ridge Middle School (PRMS), mainly Mrs. Connie Weinberg. She accepted an offer by the Museum Visit Coordinator, Major (Retired) Lloyd Graham, to get her students up close and personal with aviation technology, and the resident equipment, artefacts, and history associated with the Base.  Connie’s students were the first to attend and she was instrumental in helping critique the initial program with her students in January 2003. Her positive response and interest and the enthusiastic support of the museum volunteer instructors provided the momentum to continue with the program and expand the scope to include other schools and the spectrum of technological information available in the museum.

The Flt Ed program is structured to complement the school “Flight” unit set out by the Nova Scotia Department of Education for the grade 6 syllabus.  FltEd school visits are generally run once per week, on a Wednesday, from about 0930 until noon during the period mid-January to mid-April and can accommodate about nine schools.  Weather days are incorporated for some flexibility in scheduling.   Fifty to sixty students and escorts per visit are ideal.  They arrive by bus at mid-morning, are divided into six groups and rotate through six main areas of the Museum at twenty-minute intervals until noon.  There is a 15-min snack/bathroom break mid-schedule.  If required, the facilities at the VPI Centre are available on request to accommodate the students with their noon lunch before returning home.

The various areas of the museum include:

Area 1 - Computer Flight Simulation is a power point/movie presentation encompassing various aspects of aircraft design and instrumentation, with a simulated local flight to show the features of a military Tutor aircraft.

Area 4 - Engines/Propellers/Jets are discussed and instructors demonstrate how radial and in-line piston aircraft engines and propellers function. They also compare the operation of jet and turbine engines.

Area 6 – Spitfire, T-33 Ejection Seat, and Torpedo provides a demonstration of aircraft flight controls and various aircraft equipment, how an ejection seat permits a pilot to safely leave a crippled jet aircraft in flight, and how an air launched torpedo works.

Generally, two volunteer instructors are responsible for each area.   Most volunteers are experienced military aircrew, either retired or currently serving members of the Base with a few trained civilian volunteers. This mix covers a broad spectrum of expertise that not only benefits the students but also has a positive effect on the team concept of instruction.