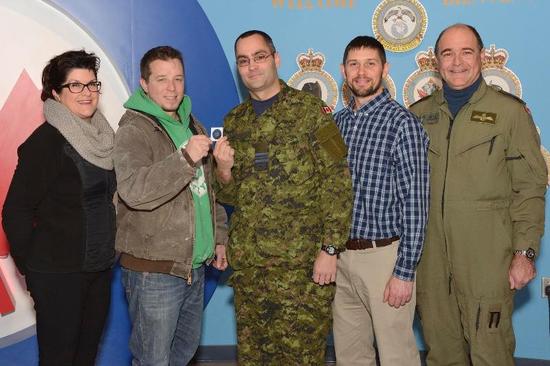 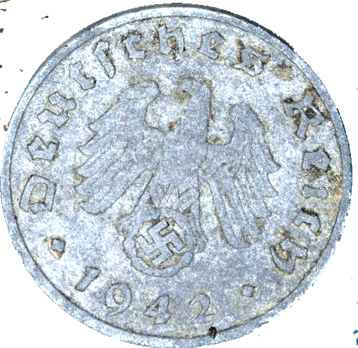 
A sharp eye for a small thing has turned into the latest addition to the Greenwood Military Aviation Museum’s collection. James Cooper, a Mid Valley Construction contractor working at 3 Maple Street, in 14 Wing Greenwood’s Residential Housing Units in December; spotted a dime-sized coin wedged in a crack. “When we do asbestos abatement, we have to scrape up and vacuum up every little bitty thing,” Cooper said January 21, as the coin was presented to museum officials. “I have 100 pennies away – then I saw this and, sure enough, there was a swastika on it.”

Cooper found a Reichspfeenig, a Germany-minted coin used between 1942 and 1945. It’s not very rare, and maybe worth about $10 to collectors, but it’s of interest to the Greenwood museum.

“It’s not a big thing to see,” said Wing Heritage Officer Major Richard LeBlanc, “but it is one of the few genuine German WWII artefacts we have.”

As 14 Wing has been primarily an air force base since the 1940s, and aircrews trained here who were involved in Second World War operations were not as commonly “on the ground” in Germany, servicemen were not as likely to be “picking up things and bringing things home.” This German coin demonstrates the direct links between 14 Wing and wartime experiences.

“Very possibly someone brought it back, it slid under a baseboard and renovations over the past 50 or 60 years – it was lost,” LeBlanc said. Finding out who may have lived in that base housing unit so many years ago is more than challenging; and, as LeBlanc said, “it is a penny.”

The value in the coin for the museum, LeBlanc added, is the story it represents.

“Every week, someone comes in to the museum – ‘I found these in my grandfather’s things, are they of value or use?’ They offer it to the museum, and we say ‘Yes.’ These items become part of the collection and the history of Greenwood.”

Cooper can’t help wondering, “whose pocket did it fall out of?

“I think it’s pretty exciting, and now my name is attached to something that will be history.”

Interestingly enough, he made another discovery that same day: his girlfriend’s grandmother, Verna (Stronach) Banks had donated a Plexiglas ring to the museum, made years ago from materials found at a 1941 Harmony crash site. A young airman Stronach met at the time made it for her.