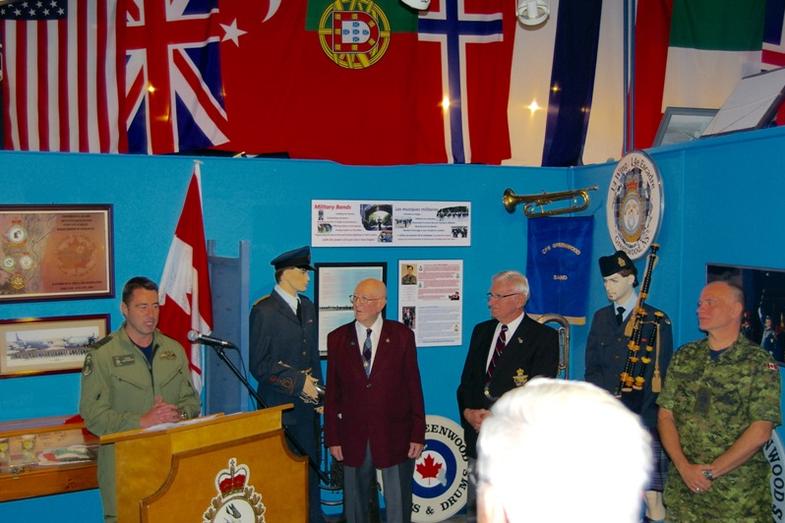 At one time, the importance of military music saw drummers and buglers leading the force into the face of the enemy. Now in a more ceremonial role, military bands have just as valued a role. The 75-year history of the 14 Wing Greenwood band is now captured in a display at the Greenwood Military Aviation Museum. Opened October 17, the exhibit includes photos, instruments, drum head art, uniforms and a fully-kitted out piper – complete with bagpipes. “The museum is always changing, and telling a story,” said Ian Patrick, chairman of the volunteer museum society’s board of directors and head of exhibits. While the focus started with the military squadrons and missions, the museum features displays about the base’s supporting elements, and life in Greenwood. “This band display is really a credit to this man here,” Patrick said, pointing to Erle Dolsen, standing beside him. “He showed up one day about 15 years ago with a bandmaster’s uniform: ‘Would we like this?’” Dolsen was bandmaster at 14 Wing from 1962 to 1972, cobbling together a band from servicemen begged from their bosses for practices. “’We are your publicity,’ I told them,” Dolsen said, “and it caught ﬁ re.” Dolsen advocated for instruments, uniforms and time; but the band made its mark on the base and in the wider community. While he himself played for the Queen, United States President Harry Truman and was The Last Post bugler in Ottawa for many years; Dolsen remembers one invitation the band accepted to play for the Nova Scotia lieutenant governor’s lawn party. “Everyone was happy, we played, the food was served. Afterwards, the lieutenant governor came forward and called the waiter, asking him for a case of cold beer for us. The waiter said he didn’t have any. The lieutenant-governor said his hearing was poor. Well, about ﬁve minutes later, that case of cold beer arrived with glasses, and we passed it out and there was one left. I asked the lieutenant-governor would he like to share it with me. We sat down on the black box I stood on to conduct, all scuffed up from my shoes, and he talked to us, the men. “What a wonderful experience. The most important man in Nova Scotia - sitting there with a beer as if he was one of us. We enjoyed those things. It was about playing for and meeting people, and getting the music across from the band.” Dolsen commended current bandmaster Warrant Ofﬁcer Jeff Campbell and Pipe Major Sergeant Andrew Bruce for continuing to do that today. “The magic of music is still there.” Campbell thanked the museum for taking an interest in the wing’s band heritage, and went on to thank the band itself: beyond the bandmaster and the pipe major, two military members; membership in the Pipes & Drums and the Brass & Reeds bands is entirely volunteer.

“Greenwood makes use of a unique model in the Canadian Armed Forces, and we are very lucky to have two bands. And, the very best bands in the CAF system,” Campbell said, describing how serving and retired military personnel and community musicians have volunteered for decades to make music on parade, at changes of command, Mess dinners and ceremonies. “There is a healthy rivalry between the two bands, as you’d expect, but we also work well together. We’re not a professional, paid band, but we deliver a professional product. Thank you to all the volunteer musicians – exceptional people – for what you do for 14 Wing.” Wing Chief Warrant Ofﬁcer Luc Emond, who oversees the bands’ program and appearances, says the quality of the 14 Wing band means his ofﬁce has weekly requests for performances. “And I don’t think we’ve ever said no because we don’t have the volunteers. That is so important to the band, the community and the wing: without you, we don’t have a band,” Emond said. He added chief warrant ofﬁcers across the air force have been looking to strengthen the representation of non-commissioned members in Royal Canadian Air Force heritage, and this new band display, which captures the role many early NCMs played as secondary duty musicians in bands; “builds on that.” Wing Commander Colonel Mike Adamson, a piano player in his spare time, officially accepted the 14 Wing bands’ museum display, recognizing music’s role as “an outstanding ambassador for the wing” over the years. “I have had the pleasure of listening to the bands for over 14 years here in Greenwood, and I can appreciate the time, talent and effort that does into the program.”

Greenwood Band and Pipes & Drums Over The Years