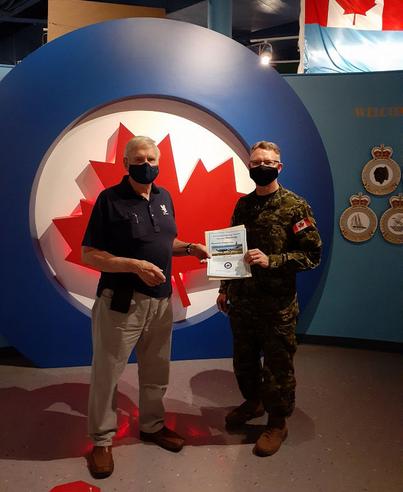 Outgoing 14 Wing Volunteer Band Master, WO Jeff Campbell, was recently inducted as an Honorary Member of the Greenwood Military Aviation Museum Society. Since arriving at 14 Wing, Jeff has provided constant support to the Museum through a new, comprehensive Band display, complete with mannequins of Band members, musical instruments, stories, and a video program of the entire history of the Band. As well, with the permission of the Wing Commander and Wing Chief, Jeff provided musicians for Museum events, such as Wings and Wheels, and annual performances at the 14 Wing Mess and the Kingston Memorial Park, where donations went to furthering the work of the Museum.

His departure means a change in life style, as Jeff will be commissioned, but he will remain a musician and continue to inspire others to be their best. The induction was performed at the Museum, 23 June 2021, with the presentation of a scroll and the Society lapel pin by the Society Chairman, Ian Patrick.