Lacking the expensive, heavy and sensitive anti-submarine warfare as well as the anti-surface warfare fittings of the CP-140 Aurora, the Arcturus was more fuel efficient and was used for crew training duties (such as touch-and-go landing practice), general maritime surface reconnaissance (detecting drug operations, smuggling of illegal immigrants, fisheries protection patrols, pollution monitoring, etc.), search-and-rescue assistance and Arctic sovereignty patrols. The Arcturus did possess a superior AN/APS-507 surface search radar, incorporating modern functions such as track-while-scan that the Aurora's AN/APS-506 radar lacks but the Arcturus did not have an integrated mission computer, or mission systems. It did, however, maintain the same military communications suite as the CP-140 Aurora.[citation needed]

All three aircraft were based at 14 Wing. One was used for technician training with the school on base CFB Greenwood, Nova Scotia and in August 2016 was moved the Greenwood Military Aviation Museum. Two of the CP-140As were retired in 2011 when they were delivered to the Aerospace Maintenance and Regeneration Group (AMARG) in Tucson, Arizona.[

By Ken Mist - originally posted to Flickr as CP-140A Arcturus 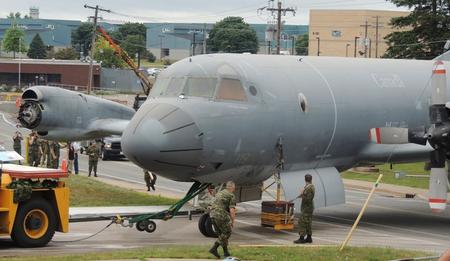