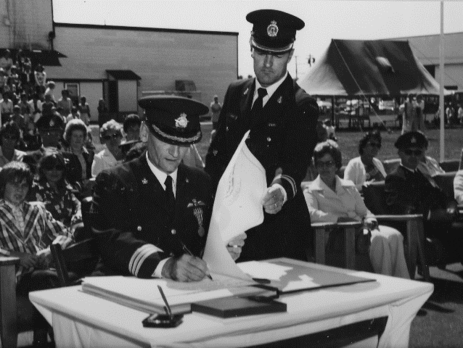 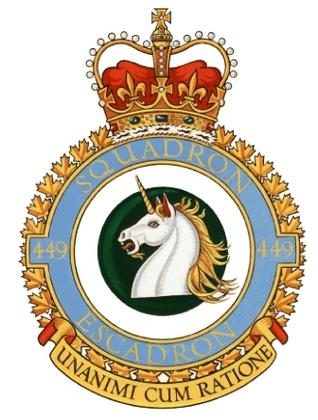 The last official flight of 449 Squadron

As a result of the phase-out of the Neptune aircraft on 1 April 1968 major reorganizational changes were made to units at CFB's Greenwood and Summerside. The Maritime Operational Training Unit (OTU) was re-designated 449 Matitime Training Squadron and relocated to CFB Greenwood.

​The Argus Conversion Unit and 9 Feld Technical Training Unit were disbanded and their functions were included in the role of 449 Sqn. The Operational Flight Tactical Training section and its technical support was removed from CFB Greenwood's establishment and included in the 449 Sqn organization. 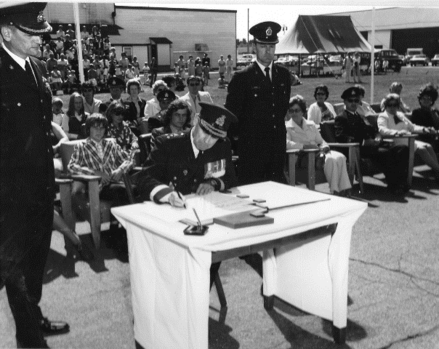 Crest Description
Argent in front of a pomme a unicorn's head couped Argent horn and mane Or.

Significance
The squadron adopted a unicorn as its badge device for, like the fabulous animal, its self assurance comes from the knowledge that it combines the best of the many parts of which it is composed. The pomme is in recognition of Greenwood, the location where the squadron was formed.

​b. Train technicians in the maintenance of airframe, engines, systems and equipment of the Argus aircraft;

​d. Conduct search and rescue operations and other tasks as required. 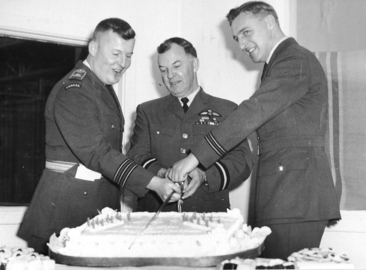 In December 1968 MOAT Course #1 graduated from 449 Squadron and to celebrate this historic event the Squadron held an open house.

In 1975 due to the severe shortage of money within the Department of National Defence, all commands were required to recommend areas for reduction. The major loss in Maritime Command was an operational Argus squadron and the associated technicians and other support trades. CFB Greenwood's loss was 6 Argus, reducing the fleet from 18 to 12 at this base, and a total of 242 personnel. Because of a desire to keep the senior maritime squadron in existence, it was decided to zero man 449 Squadron, the training unit, and change 404 Squadron's role from that of an operational squadron to training. This change in roles took place on 29 August 1975 attended by Vice Admiral D.S. Boyle as the reviewing offices. On this date 449 Squadron ceased to exist. 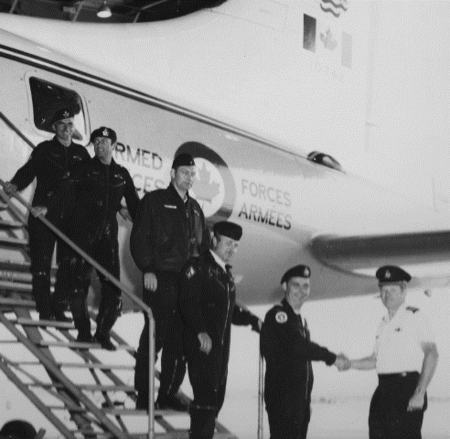