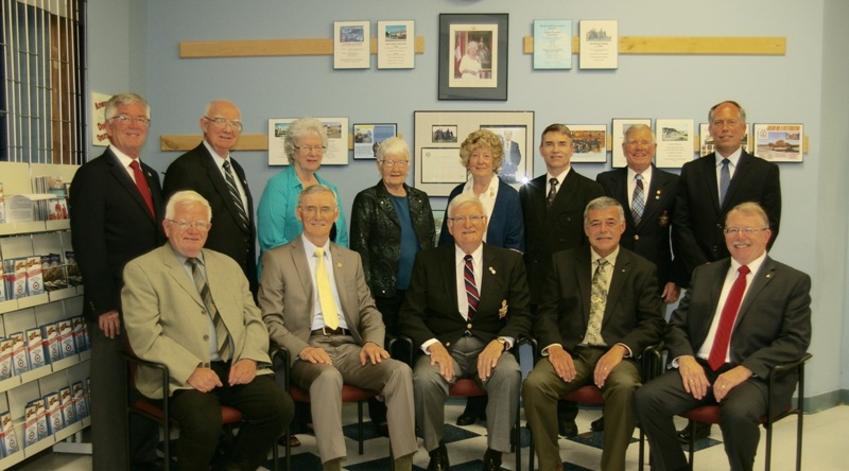 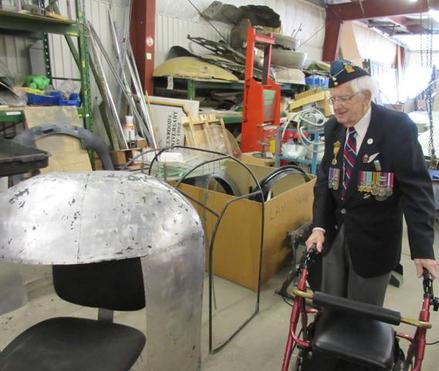 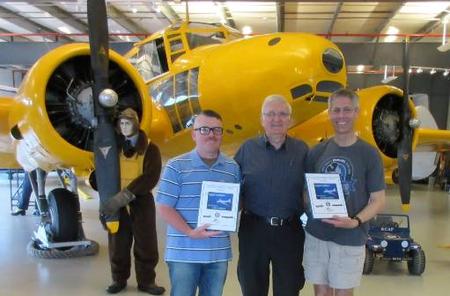 Many Greenwood Military Aviation Museum visitors met this year’s summer student, Emily Albert. This delightful young lady did an exemplary job of welcoming museum visitors all summer and, in doing so, charmed fellow museum staff and volunteers. August 27 was Albert’s last day and, at a thank-you luncheon, she was thanked for her efforts. It turns out Albert’s dad is Captain Rob Albert, a long-time museum contributor to the 404 Squadron display and designer of the museum’s now familiar logo. Captain Albert was the first museum webmaster – not enamoured with the original black and white attempt. On an Aurora ﬂight to RAF Kinloss, Scotland, not being able to sleep on the aircraft in the middle of the night high above the North Atlantic; he took out his notebook and sketched out the ﬁrst drawing, which ultimately became today’s logo. The Greenwood Military Aviation Museum: a family affair indeed. 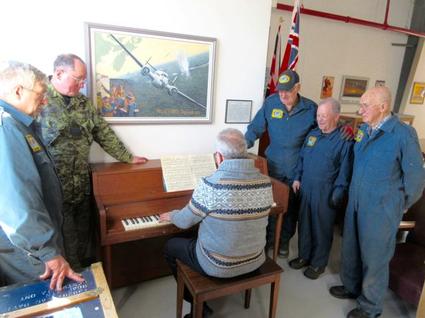 Look at these two men, side by side. Seventy-two years ago, they were walking away from wartime years, flying Lancaster bombers over Europe in one of the deadliest roles an airman could play. Their shared experience carried them through reunions and exchanges for over 40 years; 30 years ago, they lost touch, each presuming in more recent years they were the last of that Lancaster crew. In a twist of time, as Warrant Officer (retired) Roy Morrison, 93, was being recognized in the Greenwood Military Aviation Museum’s Lancaster Living Legends project in April for 35 missions as a tail gunner, he was reconnected with his old comrade, Flying Ofﬁcer (retired) Henry “Chick” Hewitt, 95. Following a phone conversation, and support from the Royal Canadian Air Force Association Trust, the men have met again. Morrison, of Truro Heights, Nova Scotia; was awaiting Hewitt’s arrival from Oshawa, Ontario; October 4, as the pair was escorted by family, friends and ofﬁcials through a series of dinners, gatherings and Hewitt’s own induction into the Living Legends project at the 14 Wing museum October 6. Hewitt signed a metal plaque, detailing his Lancaster service – 35 missions between England and Germany between 1942 and 1945; and riveted it onto a metal display panel that will be placed inside the museum’s restored Lancaster where Hewitt worked as a navigator. The men shared 30 missions as two Canadian members of a Royal Air Force 90 Squadron Lancaster crew. “Outstanding, the odds…,” said museum representative Dave Saulnier, who leads the Lancaster Living Legends project, as he described Hewitt’s extensive mission roster – but also the remarkable events that lead to the men’s reunion. “This marks the induction of a newcomer in our program – a special event. Not only does Mr. Hewitt join 11 others already inducted, one is a former crewmate. We’re proud to have this program, and glad it has been instrumental in the reunion of two ‘gladiators.’” 14 Wing Greenwood Commander Colonel Mike Adamson welcomed Morrison and Hewitt, and also the previously inducted Lola Videto, a Lancaster aircraft assembly worker; and former Lancaster middle upper gunner Sergeant (retired) Clark “Monty” Montgomery. “Command of this wing is an honour and a privilege, but that’s day-to-day business,” said Adamson. “This – honouring people who have gone before – is truly special, and what I will remember.” Hewitt and Morrison are “two brave men,” Adamson said, describing how just 27 per cent of Lancaster airmen survived unscatched, and how fewer than one per cent of men born 95 years ago are living today. “These men are living legends: they are in the minds of their own aging generation and their families; but also for future generations as well. Their plaques and signatures, that indicate “I am here’ inside our Lancaster, remind us they are still our special heroes 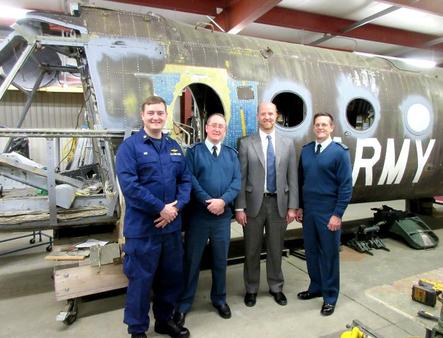 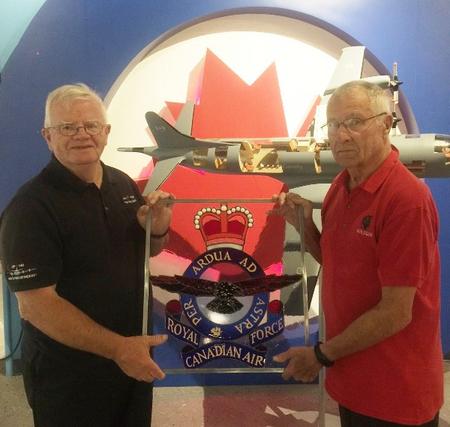 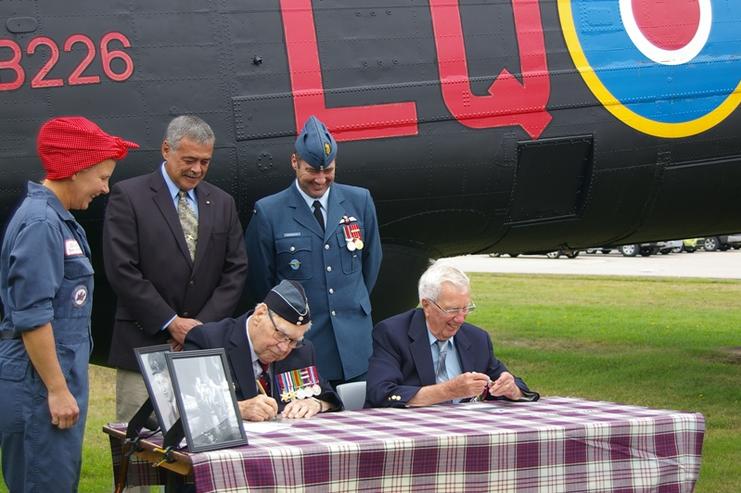 GMAM Society Chairman Ian Patrick presented two more GMAM Appreciation Awards to George Saulnier and Luke Uhlman. George, Museum member Dave's brother, compiled and produced an historical video of Base Greenwood's inception and the British Commonwealth Air Training Plan (BCATP). George lives and works in Arizona. Luke appropriated the research of Chris Larson and Russel Keddy ...of aircraft accidents and incidents during the war years here at base Greenwood into an interactive, on-line map showing location, type of aircraft, aircrew members and nationalities. Luke is Museum member Malcolm's son and lives and works in Bangor, Maine.
Patrick stressed that because of these initiatives, GMAM is not just a dust-collecting assortment of artifacts, but a growing collection of these types of projects, making GMAM always changing, always vibrant. Thanks to George and Luke.​ 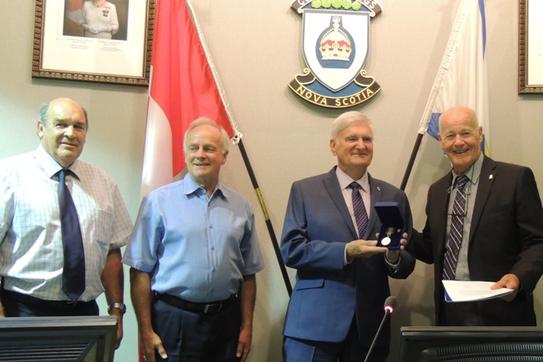 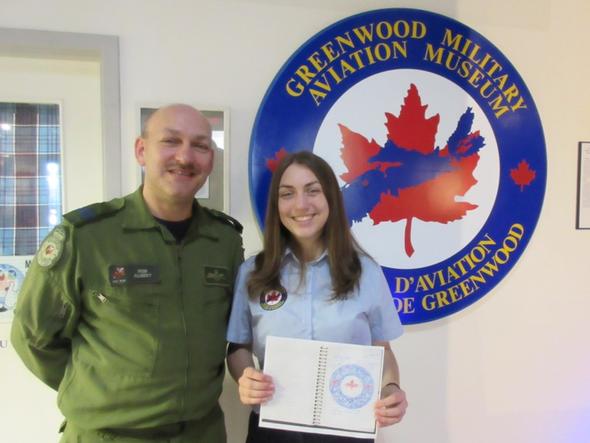 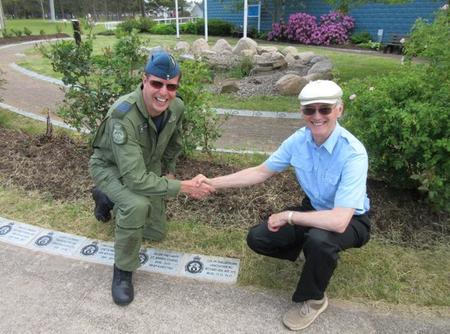 Veteran Lancaster rear gunner Roy Loomer examines the rear turret restoration in the Museum's workshop. Roy's Lancaster was shot down on a raid over Germany. He survived bailing out suffering a broken ankle and spent time as a prisoner of war. Looking over the pieces of the turret he remarked " there sure wasn't a lot of room in there!" 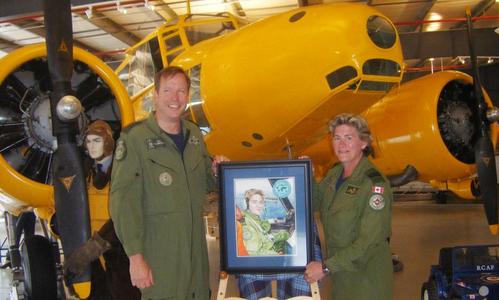 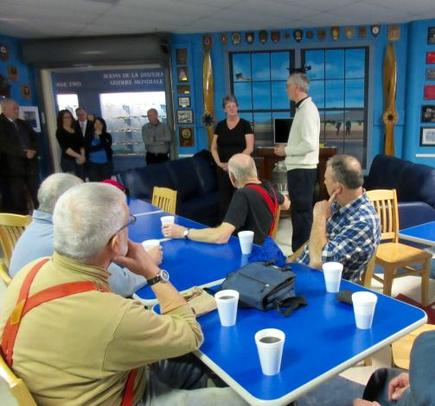 As part of a Wing familiarization tour, Capt Robert Johnson and Major Al Baillie provided a Museum tour to Mr Steven Giegerich, U.S. Consul General in Halifax, and two of his staff members. Accompanying the Consul General on the tour was LCdr (USCG) Roland Orr, US Coast Guard exchange officer flying the CC130 Hercules with 413 Squadron. Of interest, in the restoration shop, was the forward fuselage of a US Army H21 helicopter used in the restoration of the Museum’s RCAF H44 “Flying Banana” helicopter of 1960's Search and Rescue fame. The H21 and H44 shared similar airframes.

Latest Museum donation, a disused piano from 14 Wing Band for the lounge area in the Museum Extension WW II displays. Carl West, Band member and Museum volunteer, tinkles the ivories during a break for the Bolingbroke Restoration team.

GMAM Society President Brian Handley, on behalf of the Society, presents to outgoing Wing Commander Col Pat Thauberger, a personalized stone along the Commemorative Gardens Walkway as a token of thanks for his invaluable assistance during his tenure as 14 Wing CO.
Accompanying Col Thauberger was his beautiful wife, Cathy.

​Latest Inputs At The BottomOf The Page 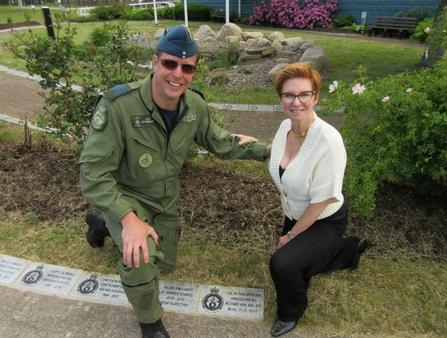 On behalf of the Museum Society, President Brian Handley and friends thanked Karen Taylor for her service and friendship over the years operating the FlightLine Cafe. Both will be sadly missed. Good luck Karen from all of us!